Google’s Mobile-Friendly Boost: What Your Business Needs to Know

Any great entrepreneur will admit that identifying crucial opportunities, and subsequently taking advantage of them, is the secret to success. Creative Click Media is here to announce the emergence of such an opportunity with Google’s search engine update. Recently, Google developers released an algorithm update that places a greater emphasis on mobile-friendly website content. The update follows last year’s infamous “Mobilegeddon,” a ranking algorithm tweak intended to boost mobile-friendly websites in a mobile Google search. While this most recent update is not expected to be as earth-shattering as Mobilegeddon, it still carries valuable implications for businesses hoping to advertise their website through search engine optimization (SEO). Here’s what your business needs to know to stay on top and increase the bottom line.

In February of 2015, Google’s Webmaster Central Blog announced a major overturn in how Google ranks websites in its search engine:

The update was not surprising to many; organic internet searches were already gradually transitioning from desktop-based to mobile-based. For the most part, the trend can be blamed on technological advancements and innovation, producing smartphones small enough and attainable enough for most first-world citizens. In 2014, worldwide 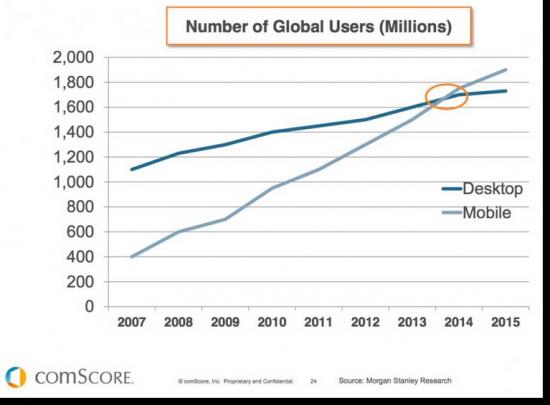 mobile search volumes met and exceeded that of desktop searches— a sign that the internet was clearly moving towards a mobile-based future. Therefore, the announcement that Google search engines would favor mobile-friendly content was all but inevitable.

However, many were apprehensive about Google’s mobile update. Countless web developers and SEO companies based their online presence on unresponsive content: websites intended to be viewed on a desktop, lacking the capability to change their appearance and fit mobile devices. On April 21, 2015, Google would regard these websites as outdated, penalizing their search engine rankings. Thus, the update was dubbed “Mobilegeddon.” However, the update presented an opportunity to developers willing to adapt or entrepreneurs who already operated on a mobile-friendly platform. Websites built with responsive design would see their rankings increase, as Google rewarded them for using mobile-friendly content.

Last Thursday, Google officially released the second edition of its mobile-friendly saga. Essentially, the latest amendment to Google’s algorithm will further reward mobile-friendly content, while further penalizing websites that continue to use outdated, unresponsive content. The long-term effects of this update are not expected to be as massive as those of Mobilegeddon for two reasons:

Why Should I Care About Google’s Mobile-Friendly Update?

With this new update, Google has fully completed its transition to responsive design. The search engine now favors websites with mobile adaptivity, while abandoning websites built on unresponsive desktop platforms. Companies looking to utilize SEO techniques to drive traffic to their websites now must take this into consideration. 90% of all organic search traffic will convert to one of Google’s top ten search results; those ranking beyond the first page of results lose nearly all potential to generate online leads. Businesses looking to stay on top of their marketing campaign need to adopt a responsive, mobile-friendly website. Even a minor penalty from Google may put your website out of reach for potential clients.

If you are an entrepreneur at the forefront of your industry and fear that an outdated website may erode your advantage over the competition, contact Creative Click Media. Our websites are exclusively developed on mobile-friendly WordPress platforms, ensuring that you can reap the benefits of Google’s latest algorithm update.