Optimizing for Google Penguin: Everything You Need to Know In 2020

Search Engine Optimization (SEO) has a long history. For as long as search engines have existed, there have been marketers trying to make it to the top of search results. Google quickly emerged as the most popular search engine because of its ability to provide users the most relevant content based on its advanced algorithm.

SEO has to evolve with the fast-paced search engine landscape, including major algorithm changes. Google has added to and modified its original algorithm for various reasons, but all these updates seek to achieve their ultimate goal: to continually provide the best content to their searchers.

The introduction of Google Penguin to Google’s algorithm in 2012 sought to do just that: targeting marketers manipulating search results. Before we can jump into all things Penguin, we must first understand Google’s algorithm.

Core Changes To the Google Algorithm

Over the years, Google has only gotten smarter. Why? Because Google is constantly running experiments, identifying weaknesses in the algorithm, and making changes accordingly.

Document relevance drives the world of search engines, and therefore the world of SEO. The process deeming a document as relevant has, however, has changed significantly throughout the years.

Before Google, other search engines such as Yahoo and AltaVista determined relevancy by simply looking at keyword density and Meta-tags. Google’s 1998 launch changed search engines as we knew them, as they ranked pages not just based on relevancy but also on quality. Some of the core updates of Google’s Algorithm are as follows:

Google Penguin: The penguin update piggybacked off of Google Panda, it was also implemented to reward higher quality websites. However, Penguin focused specifically on keyword stuffing and devious link building.

Google Hummingbird: Hummingbird was considered an overhaul of the algorithm as a whole, rather than just an addition to the existing algorithm. It sought to tackle understanding searcher intent.

These are just a few important algorithm updates made by Google throughout the years. Each and every update to Google’s Algorithm has been significant in their own way but, for the purposes of this article, we’ll be focusing on Google Penguin. 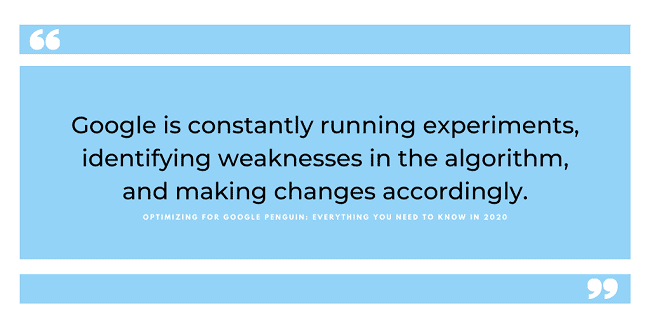 What is Google Penguin?

Google Penguin was officially launched in March of 2012. Penguin is considered an extension of Google Panda since both updates shared the same goal of decreasing the presence of low-quality websites. Though their goal is the same, they achieve results by different means. Penguin came in response to the blatant manipulation of search results that ignored Google’s guidelines. How were people able to manipulate search results? By using malicious link-building tactics and keyword stuffing.

Penguin looks at a specific website’s backlinks – links pointing to that website from other sites – and determines whether they were earned by high-quality content or bought/obtained through illegitimate sources. After the introduction of Google Penguin, websites engaging in deceitful link building were penalized by ranking lower than sites using optimization tactics within Google’s guidelines. 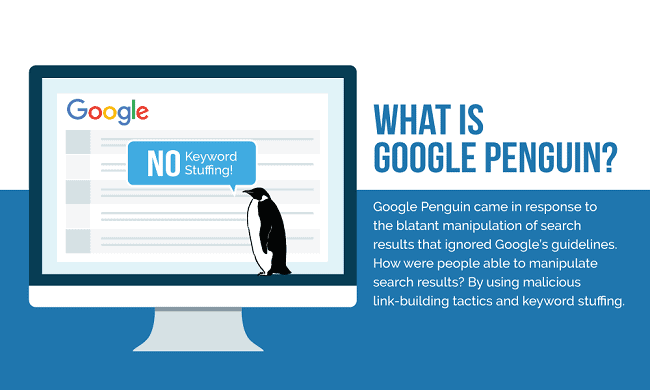 Google remains the most popular search engine by evolving with the dynamic nature of the internet. This is why they’re constantly rolling out new changes or updating existing parts of the algorithm.

Since 2012, Penguin has gone through a few different iterations to make it what it is today. To help understand its evolution and its subsequent impact on SEO, you will find the known modifications to Penguin that Google has made over the years below.

Google estimated that when Penguin first launched, it targeted websites that had obtained faulty backlinks for the sole purpose of boosting page rankings. According to Google, the initial introduction of Penguin impacted more than 3% of search results.

Penguin 1.1 was more of a  data refresh rather than an outright modification made to the algorithm. This simply meant that those actively trying to recover from Penguin’s launch saw some relief and more of those who had flown under the radar were caught and penalized.

Penguin 1.2 mirrored 1.1 – it was another data refresh designed to help those trying to clean up their act and catch those still participating in shady link-building schemes.

Penguin 2.0 was the first major change in the algorithm. It made it so Penguin looked deeper into a website, past the home page and pages linked in the menu, for evidence of dishonest link-building.

2.1 was another data refresh, the only refresh for Penguin 2.0. Some speculate that this refresh made it so Penguin crawled websites even more thoroughly than 2.0 to find evidence of link spam.

Google Penguin 3.0 was deceivingly named – it sounds like it would be another major update to the algorithm. However, this update was just another data refresh to continually reward those who abandoned link-schemes and penalize those who try to cheat the system.

Penguin 4.0 was the software’s final form. The most notable change? Google Penguin officially became part of Google’s core algorithm, rather than an independent program working in tandem with it.

Should I Be Worried About Google Penguin?

Now that you’re familiar with Google Penguin in all its forms, I bet you’re wondering whether or not Penguin poses a threat to your website. The simple answer? Only if you or your marketing company are trying to optimize your site in ways that violate Google’s guidelines.

It’s been 8 years since Google rolled out the first iteration of Penguin. It was meant to target those trying to dishonestly manipulate search results. Due to precautionary measures, like Penguin, it’s much harder and more detrimental to try to fool Google these days.

In 2020, it’s much easier and much more effective to engage in white-hat SEO strategies. Trying to manipulate search results can have consequences, costing you new business by keeping you far away from the first page. 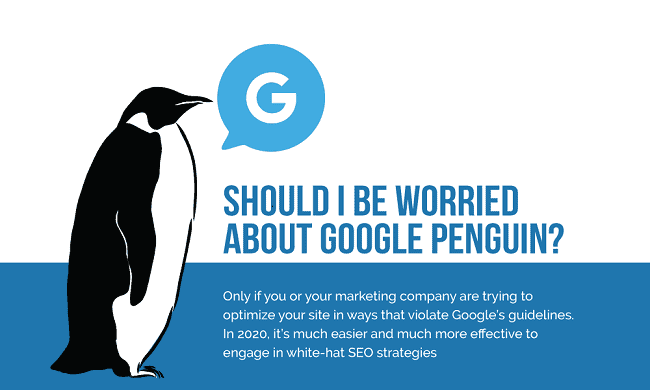 Though Penguin is not something to fear for a new website, older websites may have been affected upon first launch. If your website has been impacted by any iteration of Penguin, there are a few things you can do to improve in the eyes of Google. One of the most important steps to recovering from Penguin and beginning to build a solid SEO strategy is having an SEO audit done on your website.

SEO audits are helpful because it will tell you exactly where your website is ranking based on certain SEO keywords. How does one go about running a website audit?

Creative Click Media offers a free, single page SEO audit that can provide a brief insight into the ‘ranking preference’ Google is giving your page.

While this snapshot can give you a general impression of how your website is ranking, it does not provide a full picture. For that, consider having a full website SEO audit run on your site. While this process is, sadly, not free, it does provide priceless metrics on the overall well-being of your site, and can help you readjust and rectify the functions of your site that are negatively affecting your ranking.

Optimizing for Google Penguin: Everything You Need to Know In 20202020-07-072021-02-23/wp-content/uploads/2021/01/blue-01-103.pngCreative Click Media/wp-content/uploads/2020/07/copy-of-copy-of-copy-of-bmc-article-10.png200px200px
About
Adam Binder
Keyword-cruncher, customer-collector and web designer extraordinaire. Adam is the Founder of Creative Click Media. If he's not in front of the computer marketing your business, he's playing with his son, Miles. Tweet him at @AdamBinder_ 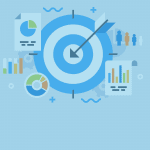 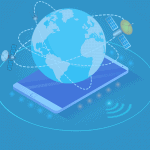