The 2016 Presidential Election is really like no other, and Twitter has a lot to do with this.  This 58th election season has been referred to as the “Social Media Election” because of the overwhelming significance that social media has played on this election season.  Following President Obama’s successful social media campaign during the 2008 and 2012 elections, the current presidential nominees have taken their social media outreach efforts to an even more impactful level.  Social media, and Twitter, in particular, have taken precedent over traditional forms of media for primarily three reasons: it’s quick, it’s free, and it reaches millions.  While previous candidates would need to schedule interviews and debates to get media coverage, their every word is now instantaneously broadcasted through the Twitterverse, generating an immeasurable amount of free press.

The 2016 Presidential Election is also incredibly unique because the three remaining candidates could not be any more diverse.  An outspoken businessman, a self-described socialist, and a former first lady by no means fit the typical presidential candidate typecast, yet they are the perfect personalities to pioneer this new wave of digital campaigning.  We’re taking a look at each candidate’s target audience and tone, as well as the sheer numbers behind their tweets, to determine who is most successfully using Twitter as a campaign platform.

Trump’s Audience is The Media: Trump’s social media campaign has gotten so Meta that one might think it’s a parody account.  Trump has been using social media masterfully as a tool to gain free press by giving reporters what they want – attacks on others and praise for himself.  He knows that people wait patiently for him to make comments about other candidates, and his narrative against “Lyin’ Ted,” “Little Marco” and “Crooked Hillary” have gone on to become mainstream media jargon.  Trump also knows that Twitter is a way to promote a brand, his brand being himself.  Despite the questionable taste level of his Cinco de Mayo tweet in which he turned a Mexican holiday into an ad for Trump Tower Grill, it still received 77,000 retweets and counting.  Controversial, yes – but Trump knows by now that controversy makes headlines. 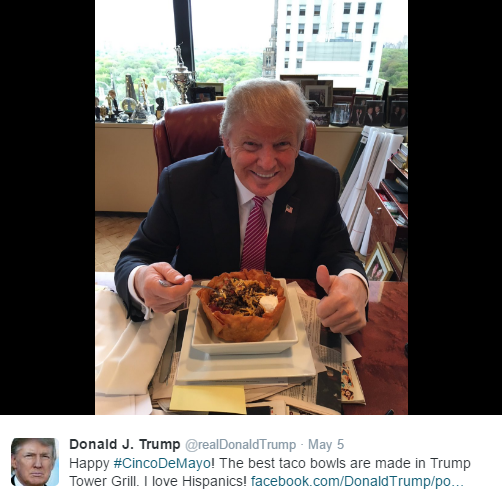 Bernie’s Audience is The People: Bernie’s Twitter is a clear call-to-action for several underrepresented demographics of voters, namely new voters and those living in poverty.  When in competition against a former reality star and potentially our first woman POTUS, it is still quite astounding that a 74-year-old senator is the voice of the youth in America.  Bernie’s campaign team has certainly harnessed the power of social media in reaching out to this demographic, retweeting celebrity supporters whom these young voters might look up to.  His tweets echo his sentiments at each of the Democratic debates, looking to energize voters with his calls for change in education, poverty, and the economy.  His tweets contain a plethora of “us” and “we” statements, further driving home this idea of being one with the people. 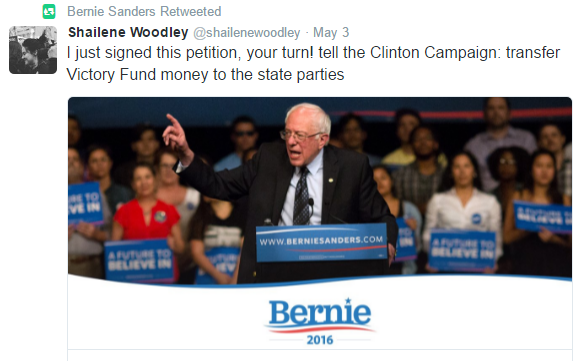 Hillary’s Audience is The Never Trump Movement: Hillary knows that this election is no longer a case of party versus party, it has become a case of Trump versus Not-Trump.  She no longer uses Twitter to promote herself as the Democratic nominee or even the only woman nominee, she uses it to promote herself as the Not-Trump nominee.  Her Twitter feed is filled with anti-Trump sentiments, mentioning him 40 times in tweets between April 30 and May 6 alone.  However, instead of Trump’s “I” statements, she prefers to use “we,” as in “we” as a country will be the ones who will prevent the White House from becoming Trump Manor.

Trump’s Tone is Negative: Unsurprisingly, Trump really only has nice things to say about himself and his supporters.  Since declaring his candidacy last June, Trump has gone on to insult anything and everything under the sun, including his competitors, Fox News, the United States of America, Macy’s, Major League Baseball, and “Keep on Rockin’ in the Free World” (he “didn’t love it”).  The thing is, negative works for him.  His supporters vehemently love the fact that they have a nominee who could care less about being politically correct.  Finally, under President Trump, we will all be able to freely announce our disdain for Neil Young’s songs.
[For a good laugh, check out the New York Times’ list of The 210 People, Places, and Things Donald Trump Has Insulted on Twitter.]

Bernie’s Tone is Authoritative: Bernie sure does like his statistics.  Rather than listing a set of empty promises (ahem, a wall), he presents his Twitter followers with facts supported by numbers, which helps to demonstrate that he knows what he’s talking about.  He also tweets with the confidence of someone who already won, starting several tweets with “as your president…”  While he may seem like the odd man out at this point in the election, taking on this authoritative dialogue sends the message to his followers that he is very much still in the race.

Hillary’s Tone is Passionate: Reading through Hillary’s recent tweets, one thing is for sure – she really wants to beat Trump in November.  Her hunger and drive to be the one to take him down is almost inspiring, and the narrative of her Twitter feed is setting this up to be an epic all-American showdown in the coming months.  Along with her passion for beating Trump, Hillary’s Twitter displays her passion for her supporters.  While Bernie’s tweets are almost all ethos and logos Hillary is all pathos, appealing to the emotions of her supporters by calling herself a “wife, mom, grandma, [and] women+kids advocate.” 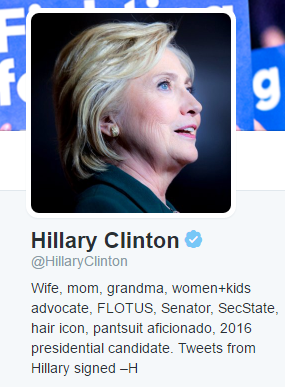 So much of the election is based on personal preference, but one thing we can all agree on is that the numbers don’t lie.  Here’s a breakdown of each candidate’s Twitter-based on concrete numerical data:

Winner: Trump for sure.  Of course, there is no way to know for sure how many of his followers are true supporters versus how many are followers for the entertainment value, but as far as sheer numbers Trump has the lead.

According to a November 2015 audit determining how many Twitter followers of each candidate are either spambots or inactive:

Winner: Bernie by a landslide.  Granted he was not nearly as notable in the Twitterverse as his competitors prior to his candidacy, but a 90% activity rate of his followers is astoundingly impressive for any public figure.

We analyzed the number of shares on the most popular posts of each candidate to see whose tweets are reaching the widest audience:

Winner: Trump again.  Horrendous to some and humorous to others, Trump’s Cinco de Mayo tweet has become the most retweeted tweet of the election season thus far.

Where They Are Tweeted About:

Based on Twitter statistics through the New Hampshire Primary (until February 9, 2016), here are the states where the candidates have been tweeted about the most:

AND THE WINNER IS…

Like it or not, Donald Trump is crushing his Twitter campaign.  He’s not necessarily winning over new fans with his aggressive Twitter rants or slightly offensive tweets, but he’s getting the same press coverage that candidates of elections past would pay millions for – for free.  Hillary might be dominating with the anti-Trump crowd and Bernie might be dominating with a younger demographic, but in totality, it is undeniable that Donald Trump is reaching the largest audience and receiving the most media attention through his Twitter antics.  How this will shake out come November is yet to be determined, but one thing is for sure – all eyes will be on Trump from here to the White House.

What’s your take on Twitter’s impact on this election?  Who do you think has had the most successful Twitter campaign?  What could each candidate be doing better on social media?  Weigh in with your thoughts in the comments section!