The first day of Facebook’s F8 conference, Facebook’s biggest developer conference, took place today and keynote speaker Mark Zuckerberg did not disappoint the thousands of tech junkies eager to hear Facebook’s plans for 2016.  In addition to the previously announced Live Video platform, Zuckerberg opened up the conference by highlighting his three main pillars of interest – “connecting everyone to the internet, artificial intelligence, and virtual reality.”  Keep reading to see how Zuckerberg and the rest of the Facebook development team aim to execute their plans for these pillars and beyond.

One of Zuckerberg’s main points of the F8 conference was to drive home the importance of connecting people worldwide through Facebook.  With ⅔ of the world’s population without Internet access and only 55 of 7,000 common languages represented online, one of Facebook’s driving goals for the next ten years is to continue their Free Basics initiative to continue connecting these impoverished and underrepresented societies with the Facebook network.

Furthermore, Zuckerberg noted that he hopes to become more inclusive to Facebook users with disabilities and impairments.  Facebook developers have begun unrolling new technology that will make it easy for anyone to use Facebook to its fullest potential, such as a tool that will be able to analyze the content of an image via AI and read it to a visually impaired Facebook user.

By far the biggest crowd-pleaser at F8 was the announcement of the long-speculated AI-powered chatbot feature for the Messenger app.  As Facebook continues to integrate more eCommerce features into its already expansive networking platform, chatbots will allow customers to take care of simple tasks such as placing an order or making a reservation via Facebook rather than directing them to a third-party website.

The goal for the chatbot feature is to act as a virtual company representative — providing customer service, processing payments, and delivering news and promotions to past and prospective customers.  Facebook itself will soon launch Facebook M, its own digital assistant, as well as Poncho, a weather-predicting chatbot.

In addition to chatbots, Facebook users will soon be able to speak with a human customer service representative via the Messenger app rather than seeking out contact information on the business’ website.  Zuckerberg describes this as a “platform for natural language services” — a central location for Facebook users to chat with businesses via the Messenger app without having to call them or download a separate app.

Business owners will be able to purchase Facebook’s “Message Us” software in order to handle customer requests quickly and efficiently from one location.  Since there are nearly 1 billion Messenger users worldwide, businesses utilizing this extension of the Messenger app will be able to communicate with their audience more effectively via Facebook than they would through email or other third-party channels.

Remember this infamous picture of Mark Zuckerberg demonstrating Facebook’s wild, new virtual reality glasses in action?  Well, this visual may very well be a reality in the next few months, as the F8 conference detailed when users can get their hands on this new piece of virtual technology. 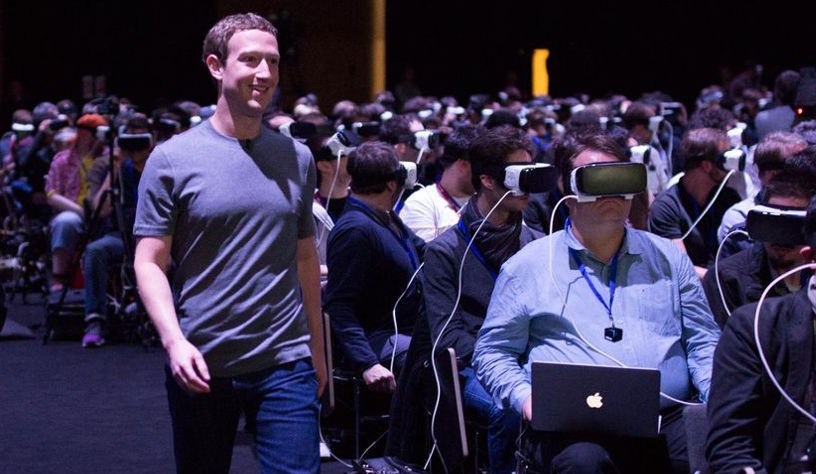 Anticipating that virtual reality “has the potential to be the most social platform”, Facebook has finally announced their plans to utilize Oculus VR software they purchased for a whopping $2 billion last year.  At this year’s F8 conference, Zuckerberg revealed that they will release the Oculus Rift controllers for worldwide use in the coming year, which will allow users to virtually interact with anyone in their Facebook network.

Another one of the long-awaited dynamos of the F8 conference was the unveiling of Facebook’s Surround 360, a 17-lens, 360-degree professional camera.  This top-of-the-line technology can shoot an incredibly impressive 8k in each eye.  This is the equivalent to 17 of the movie cameras used to film the Guardians of the Galaxy franchise— all in one compact, UFO-shaped piece of hardware.

That being said, Vice President of Marketing, David Marcus, made it a point to state that Facebook has no intentions of going into the camera industry.  Instead, Facebook technology developers will crowdsource the software and hardware for a modest $30,000.

…And Even More Updates from F8 Conference